We, Syria Legal Network-NL, declare our solidarity with the just and fair demands of the hunger strikers.

We call on the Dutch government to act quickly and follow up on the requests of the hunger strikers before they get worse. We ask to work in all possible diplomatic ways to help them achieve their goals and legitimate demands. 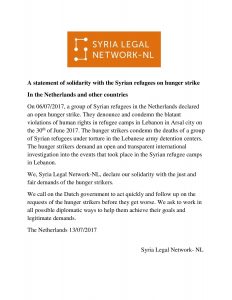